I wrote a bit about the town a while ago in this post, but have since explored more than just the waterfalls in the area. Mostly, I’ve gotten to know quite a few people who have quickly become very good friends. Everyone laughed at me when I told them how overwhelmed I feel at all the choices here, yet feel I’m without any decision making power. Apparently it’s a common phenomenon here… people come for days and stay for years. Making plans outside of Alto Paraiso just feels so difficult… and with an organic farmers’ market, great veggie restaurants and incredible nature with pure rivers, it’s really tough to imagine being happier somewhere else.

Yet I have left, and all day have been plagued with thoughts about whether it was the right decision. In this small amount of time I feel I’ve made better connections with people than in the 2 years I spent in Belgium.  I rented a room in a house with two other girls, spent the days writing, meditating, exploring, hiking, having conversations about more than the weather. 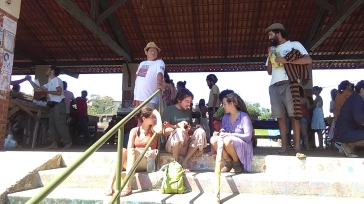 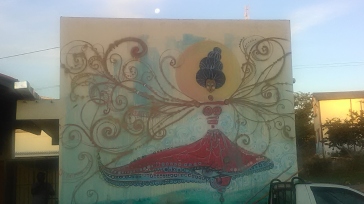 Along the way I met Thomas and Deborah, two Belgians I crossed paths with in the Amazon weeks before. In a country the size of Brazil, to meet these two in Alto Paraiso, thousands of kilometres away from where we met, felt nothing less than serendipitous. These two are amazing – they originally brought scooters to travel on, though they quickly broke and instead they hitchhiked for days in Minas Gerais before we met in Alter do Chão. Thomas has some mad didgereedoo skills and Deborah is one of the most well-read, deep thinkers I’ve met. Add that they’re vegans, meaning they have to cook their own food most of the time, and I struck gold – amazing veggie burgers, pizza and UNLIMITED chocolate truffles. Incredible. Incredible.

No doubt I’ll return to this magic place, it’s just a matter of time.