May 23 on the ECT, Miner’s Campsite

Hiked almost 40k today. Wanted to stop sooner but the landscape is so exposed, uneven and boggy at the momet that it want possible to set up camp before or after Petty Harbour, so ended up going 10 farther than planned. Happy to be going to bed in my tent now.

Met a group of 8 Newwfies tonight. Amazing that they go camping and paddling together regularly. What a cool bunch of people! They included me in the their capfire and even fed me moose sauce spaghetti! It’s hit me on this trip what people mean when they say that Canadians really are nice You hear it on the road, but I so rarely encounter other Canadians and have never really been a traveler in my own country.

The ECT has been kind to me since St. Johns and Mother Nature has been very generous with a beautiful sushiney day today. I think I go a bit of a tan. Cape Spear south for 10 km was some of the most intense wind I’ve ever experienced. It literally tipped me over a few times. Kind of lonely though, was caught by some day trippers belting out Joel Plaskett tunes during a rest stop. It made for the briefest of awkward moments, until I realized that I was wearing green pants, a blue shirt, red hat and hadn’t had a shower for a few days and that I had bigger things to be self conscious about. 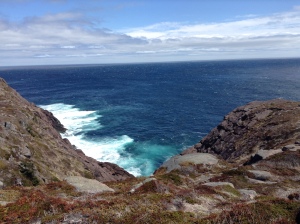 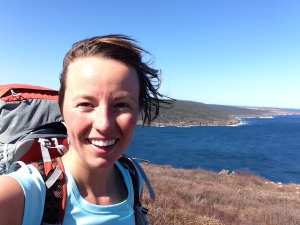