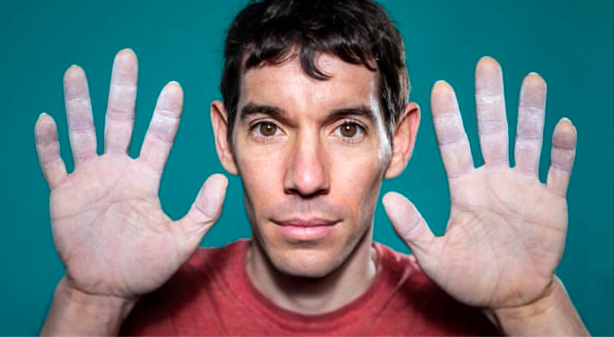 It’s been an unsettling few days in my personal climbing world. Sean and I went on a climbing move-binge over the weekend, watching Free Solo on Saturday and The Dawn Wall the next night.

Quickly, for those unacquainted with these films, they’re recently-released movies about climbing El Capitan in Yosemite Valley. Free Solo is a crazy story about a crazy guy named Alex Honnold who is known for free soloing. This means he uses no ropes, no gear at all to climb up a 3000 foot face of El Cap. Yes, if he falls, he’ll die. The second film is about Tommy Caldwell and Kevin Jorgenson’s ascent of a previously unclimbed (and thought impossible) face of El Cap. They free climb/lead climb it, meaning that they have ropes in case they fall, but cannot use any artificial means to get up the wall. Also, if they fall during a section of the climb between natural rest stops, they have to re-climb that section from the beginning all over again.

Free Solo is a polarising story. Alex Honnold is now a famous face in the climbing world, known for unreal ascents of Half Dome (Yosemite), in less than 90 minutes in 2008. A few years ago, I think at Banff Film Fest, I saw the video of his climb up Half Dome. He gets to the ledge 2/3 of the way up, and freezes. The “gravity” (hardy har) of the situation hits him. Shit gets real. He cries. He wants to get off the rock, but well, he’s between it and a hard place and there’s no way to get off without climbing up. And he does. And it’s amazing. My impression of Honnold has been one of admiration. I look at him and think he’s a different breed, structurally, chemically different from the rest of us, and that he’s doing what he loves. The concept of death doesn’t seem to loom as large for him, yet it’s ever-presence drives him into the present moment. I really get that and think it’s a cool way to live. I can understand how the higher the stakes, the more aware, the more present you have to be. There’s no space for a busy mind. The risk is high but the real awareness of of living can’t be underestimated.

Reviews on the movie are diverse. I absolutely cannot watch horror movies but am thrilled and inspired by stories like Honnold’s. Sean, however, was shaken up by what he saw in Free Solo. Immediately following the credits he turned to me and using colourful language described what an idiot Honnold must be. Some jerk part of me just thought Sean didn’t get it, he wasn’t a climber, couldn’t appreciate the focus and skill and presence that was required for Honnold’s ascent. But the next day when I went to the climbing gym, I heard the range of polarising views that both Sean and I had disagreed over. There were climbers who refused to watch the film, saying it was promoting danger for commercial gain (it’s hard to get away from that argument, considering the culture of free soloing is one of, well… solitude). Some feel it is the sell-out of the climbing community to film his ascent and release it to the masses. There are others who see him as an addict, a climbing junkie that needs bigger danger to get a rush.

I see and agree with all of these views while still remaining in awe and inspired by Alex Honnold and impressed at the film. The schism in my thoughts and feelings around it though are ironic to me though, as climbing has always been a place for singular focus, singular thought, and compete presence. While I’m impressed, there’s a part of me that wishes I never saw the film, and that it had never been made.