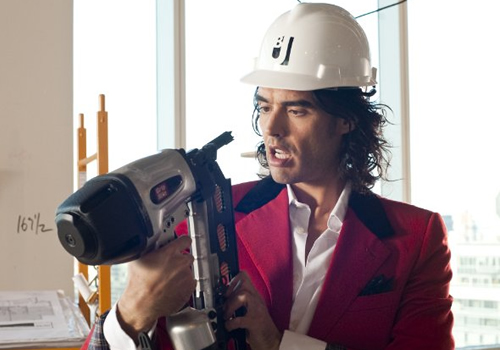 Sean and I have been renovating our apartment for the last 6 weeks. When we started, everyone said to expect the work to take longer and to budget (much) more more than expected, but no one said anything at all about doubling down on chutzpah and emotional fitness to get through it.

Six weeks is slightly misleading as really it’s been 6 months. We started back in June (maybe earlier) when we met with a contractor who agreed on the job and agreed on the price. In September, a week before the sledgehammer was scheduled to fall, he quoted a new price that was more than 3 times higher than the original. So it was back to the drawing board and we started scrounging for contractors once again.

Along the way we also met a wacky woman named Susan who picked us up while we were window shopping at a home renovation shop where she works (everything about that sentence sounds wrong). She sweet talked her way into our pocket book as we hired her to draw up  her plans. When she told me she’d lived for a year on a boat off Salt Spring Island, BC, I thought she must be pretty cool and therefore a great person to add to the renovation team. In retrospect, I realise that living alone in a 12sqm living space is not really a reason to hire someone to design a home.

Nine different sets of contractors traipsed through our house before we finally settled on Luke. He promised to get the work done before Christmas, but after demolishing a couple of walls the apartment sat empty and unchanging for a few weeks. Fastforward to now, and it’s T minus 3 days before we’re meant to move back in and there’s still no sign of the apartment being liveable any time soon. It’s a mess. There’s no kitchen (that’s Thursday), no floors (that’s Thursday), no carpet (that was supposed to be Thursday), no toilet, sink or running water (also supposed to be Thursday). The builder’s Christmas party is on Friday.

Delays are bound to happen – everyone tells you that – but I think it’s the interpersonal stuff that sends people crazy when renovating. For example, the designer (think a faster-talking, pushier Samantha á la Sex in the City) insisted on a bathtub that wasn’t what I wanted and  suspected we would be problematic. It arrived and immediately we needed to send it back because the plumber couldn’t make it work. Then she went off plan and told the contractor to tile the bathtub, a wall and the floor of the bathroom with the same patterned tile, along with a feature wall and a cupboard. It’s the busiest bathroom you’ve ever seen. When we saw it the other night we knew it was wrong but she insisted that we had agreed to it back in August. It doesn’t seem to matter that there’s two of us who remember different compared to her one – she’s sure there’s absolutely no way she could be mistaken. We’ve had to rip out the tile today and start fresh… costing us three days (bye bye Christmas finish date! {interjection from Sean: “Let’s face it, that was never gonna happen”}). When items that were meant to be onsite in advance were rush-ordered, incurring extra charges and losing items due to backorders, she blamed the contractor for not telling her when the job started 5 weeks earlier, even though she’d visited the site several times in the interim. On the other side, the contractor blames the designer and an utterly pointless cycle ensues.

Add to all this we’ve been living under an acquaintance’s roof for the last 6 weeks. We have a room packed with stuff and find ourselves talking in hushed tones after 7pm and dealing with karmic retribution in the form of a jackhammer that starts at 7:30am each day and ends at 5pm (the house two doors down has been demolished and they, too, are starting again). It’s a funny thing to live in someone else’s space… I always feel like I’m somehow responsible for a mess that isn’t there.

So I’ve learned a lot. About renovating, about signing contracts and about making sure I speak up on what I want. In other words, I’ve learned about breaking down to build up, fostering goodwill in difficult circumstances, and letting go of resentments. All the while remembering that it’s small stuff. All of it. And that some day fairly soon it won’t matter that much any more. And that some day a little farther on it won’t matter at all. It’s serious spiritual work this renovating stuff.

One thought on “Renovating is Spiritual Work”