The world’s second largest canyon lives in Colombia. Called Chicamocha, it’s a stunning feat of nature nestled between techtonic plates that bump and grind about 20 times every day.

Last week I hiked the canyon with my friend Jhon Fredy, who you may remember from a previous post. We set off late in the day on Tuesday, taking a bus from San Gil to Villa Nueva, stopping for supplies in the market before leaving and eating avocado, red pepper, bread and cheese wrapped in a banana leaf for lunch under a huge tree.

Jhon Fredy is an amazing guy. He doesn’t speak English and my Spanish is seriously limited, but somehow we communicate just fine. He exudes peacefulness, calm and has this connectedness which raises you up just by being with him. People seem to love to give him stuff, not sure why, it just happens all the time.

From Villa Nueva, it’s about a 4 hour walk to the little ghost town of Jordan at the bottom of the valley. We were lucky leaving late in the day that the sun was past it’s hottest point, and started the trek around 2 or 3pm. There are farms along the way, mostly tobacco and pineapple, with papaya as you get deeper into the canyon. Pineapple fields look beautiful and a bit surreal to me. I commented to Fredy how much I like them and he chatted with a few farmers who ended up giving us a pineapple for our journey. Then another guy appeared and gave us a pineapple, then their kids came carrying pineapples to us – by the time we left the field we had 5 pineapples freely given, fresh from the field. Pineapples are heavy and we didn’t have room to carry them so I made a sling out of my sarong and put them inside.

Later we came across a tobacco farm. Fredy talked with the farmer there who was inspired to give us two huge sheaths of pure, organic tobacco leaves. They smelled beautiful and were a huge gift – also put into the sarong for safekeeping.

The canyon is an incredibly beautiful place, with a full spectrum of colours, from deep purples to bright oranges, mellow greens to the shocking reds and yellows of tropical flowers. As we walked on dusty clay trails, dusk set in and the twinkling lights of the fincas in the valley greeted us.  Huge aloe vera plants lined both sides of the trail and, along with numerous other desert plants, created an atmosphere that felt like something out of the deepest recesses of your imagination. Jhon Fredy wandered off into the bush as I examined the giant aloes. He came back a few minutes later with a gift from nature – a 3 foot long cactus, San Pedro.

As we dawdled it grew dark and by the time we met the road leading to Jordan we were using our headlamps to descend. Unknowingly we turned the wrong way and walked for a kilometre uphill until we found a structure with a roof on semi-flat ground and made plans to sleep on some cardboard left behind by farmers. It wasn’t the poshest night I’ve spent, but it was amazing. The stars were in full force and the energy of the place pulsed with the cicadas. Each rustle in the bush would make us both start and sit up, waiting and listening.

Just as I was finally relaxing enough to get some sleep, Jhon Fredy jumped up. He had been swarmed by hundreds of little red ants. Looking in his bag we realized they had infiltrated our supplies – the bread, cheese, fruit and vegetables were covered with a red army of ants. We threw everything to the side and did what we could to get them off our cardboard. Finally, after quite some time we managed to return to a more tranquil state and JF slept immediately. I, on the other hand opted to meditate under the stars, breathing an incredible feeling of aliveness, loving each sound of the insects, the rustle of papaya trees, blissed out. Twice the earth rumbled, small reminders that the earth we walked on is alive. With some irony I thought of the place where we were sleeping – outside on dirty old cardboard, surrounded by unknown sounds on top of an ant hill, and thought about how in my past life I slept at fancy Shangri-La Hotels. Yet I was so much happier with the ants and stars.

The next morning we got an early start, established we’d been walking in the wrong direction and set out for Jordan after thoroughly cleaning each and every item we carried of ants. On the way we found 2 ripe papayas waiting for us on the side of the road – it seemed that there was someone looking out for us. As we walked on I wished I could explain to JF what was so funny, but even if I could’ve explained in Spanish I’m not sure he’d have understood… To our left was a sign indicating we were passing “Shangri-La Reptile Farm”.

Arriving in Jordan I found the town decrepit and beautiful – rustic, ancient, peeling and disintegrating. We talked to an old gent with the most beautiful white hair and white smile before sitting down for a second breakfast of lovingly salvaged cheese, bread and raw plantain. It was delicious and made me think about how all the nutrition science in the world can’t lead you to the nourishment gratitude gives. Leaving town we again went the wrong way, walking along the river lined with the walls of an old settlement, grown over with cactus and trees. Missing roofs and doors, it felt like an ancient place and made me wonder who had lived there, how and when.

Turning around, we crossed the bridge out of Jordan and started a ~4 hour uphill hike to La Mesa Los Santos, a little town on the other side of the canyon. Again, we walked mostly in silence, meeting a few locals walking down, stopping for a pineapple when we found some shade. My legs were intensely itchy – I’d been assaulted in the night by what have now been diagnosed as sandflies. Thankfully I carried coffee extract I picked up a few weeks ago in Minca that smells like heaven and eases stings and itch.

Arriving in Los Santos in the early afternoon we sat down for a drink and pondered what to do. It was the kind of trip you’re sorry has ended so quickly and the feeling sunk in. Somehow we had finished our journey without really meaning to. The cool thing about it though, was that despite a really good thing being over, there was no disappointment. Just happiness for having lived it.

*Pictures to come when my internet connection can handle it! 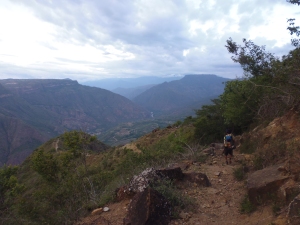