Yesterday I was willingly coerced into taking a 7 hour horse tour of the mountains and valleys surrounding Salento. As a kid I rode on friend’s farms in Saskatchewan, but aside from my 12th birthday party, I can’t remember when the last time was I rode a horse. As soon as my seat connected with the stiff saddle I knew I wouldn’t be able to walk the next day. We still had 6:59:45 to go.

I must say that the ride was incredibly beautiful – the scenery is stunning and the elevation changes extreme – I’m sure we climbed over 800m easily, probably more like 1100m+. The terrifying part was the beginning. Leaving town we entered a small single-track trail used by locals who live in the country to get into town. It wasn’t so much the narrowness or remoteness of the trail, but rather the fact that the decline was so steep our horses practically had to jump from rock to rock down the mountain. I’m not a thrill-seeker, but I have jumped out of planes (skydiving), leapt off cliffs (paragliding), and willingly fallen off rock faces (climbing), but I can’t say any of these activities were as extreme or as scary as Juan Valdez horse riding. When I was able to exhale (once every 2-3 minutes) I felt terrible for Alícon, the poor horse beneath me. My life was in his hoofs. After declining 300 meters into the valley, we started climbing, seemingly endlessly. When we finally reached a plateau I expected our horses would stop and rest after their exertion up the mountain, but instead they took off at full gallop. People often think travel is so glamorous without seeing the glories of 24 hour bus rides, broken down trains in the desert, or nights spent emptying your digestive system into a Turkish toilet. This moment, however, galloping across the Colombian plateau, just above the jungle, looking down on the tiny towns of Salento and Armenia below, does feel like a movie to me. One false step or stumble would have sent Alícon and I over the edge to roll down 1100m of rock and jungle to the valley below, but at that moment that possibility didn’t exist. I was in the moment. Dean Potter and Goenkaji would have been proud.

My lovely German companion, Nuria (expert horsewoman), was a blessing and a saviour on this trip. Our guide – let’s call him Julio – seems to have a thing for foreign ladies. Even I couldn’t say “No comprende!” believably after seeing those Spanish eyes staring into my soul as he repeatedly said “Ven conmigo esta noche” (Come with me tonight). Nonetheless, I said “No comprende!” and used Nuria as my excuse. Thanks Nuria. High five.

This morning I chatted with a German couple staying at the same hostel and told them about the horse trip. The guy asked if I travel with a Lonely Planet, to which I said no. He replied I should – then I would have known that multiple people die of head injuries horse riding here every year. 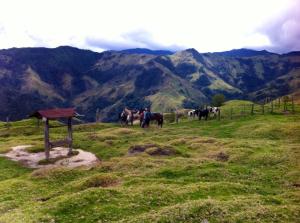